"We have recently started working on object placement feature which allows you to precisely visualize where the given object will be placed within the environment and if it’s possible to place it there."

Legendary Hero
I really want to play this, but as of right now I don't have the tech. So I'm just gonna wait until I'm living with the American and take advantage of his tech. Cuz.

So for now that leaves me with State Of Decay instead, which I'm okay with. Played the demo, was pretty good.

queenofdisco said:
I really want to play this, but as of right now I don't have the tech. So I'm just gonna wait until I'm living with the American and take advantage of his tech. Cuz.

So for now that leaves me with State Of Decay instead, which I'm okay with. Played the demo, was pretty good.
Click to expand...

I really liked State of Decay and might consider getting the XB1 version at some point. Microsoft have been working with the Undead Labs team on a multiplayer Zombie survival game for some time now (after multiplayer didnt make it into original State of Decay due to engine limitations). It has the potential to blow both DayZ and H1Z1 away though as both of those are in early access and will be for some time yet and Class 4 as its been codenamed might launch as a full finished game when it comes (little is known about it currently). If this happens it will beat both DayZ and H1Z1 to the full game retail market on all platforms.

I watch streams and videos of DayZ pretty much every day as the game fascinates me and I really like the concept. Soon as my rig is finished I will purchase it myself, even if its buggy, unfinished and going to be in alpha for some time yet as from the videos I have seen I will enjoy it if I can find some friends to play it with.

In the meantime here is SepticFalcons latest update showcase for Update 0.54 on Stable Branch...

Staff member
Guildmaster
Legendary Hero
Been a little while since I posted a status report update video...

Staff member
Guildmaster
Legendary Hero
The base building sounds great and could open up a huge amount of possibilities for the future, and love the idea of scars and beard growth to show what you have survived/how long you have survived.

A highlight of the most interesting information for DayZ at Pax Prime 2015 with Lead Producer Brian Hicks, content creators TehJamJar & xSmak as well as Twitch staff SomaJT​
​
Current Issues
Plans

Staff member
Guildmaster
Legendary Hero
Only been playing around 25mins but here is my very first DayZ Character so far...

Hard to get your bearings on where you are and what buildings you have already looted at the start but found some ok loot so far but no ammo as of yet.

Found a Mosin but no ammo yet & some better gear but I do have a 9MM pistol with some rounds but no mag so can only chamber 1 bullet at a time.

Staff member
Guildmaster
Legendary Hero
After I won a copy of the game on a Giveaway on Twitter/Facebook here is the very generous person who sent it to me on Steam. He has a server on the game too if any of you want to check it out ...​ 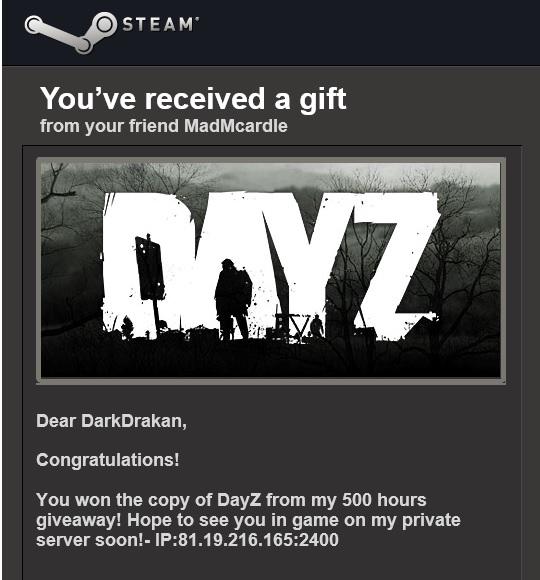